Central Park's only formal garden feels like a park within a park. The Central Park Conservatory Garden occupies a secluded spot near the huge park's northeastern corner, between 104th and 106th Streets. The 20th-century layout of its three gardens and six acres deviates acutely from Frederick Law Olmsted's faux-naturalistic design for Central Park as a whole.

Though perhaps most celebrated for its tulip bloom in April and early May, the Garden is an appealing oasis at other times of the year. Later in May, the green of springtime is on full display in the central Italian-style garden, where an enthusiastic fountain makes a big field of plain grass and green shrubs seem quite special. 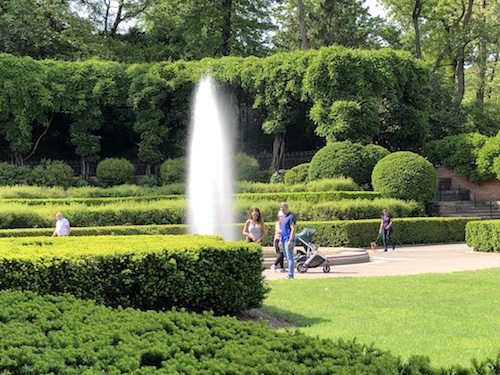 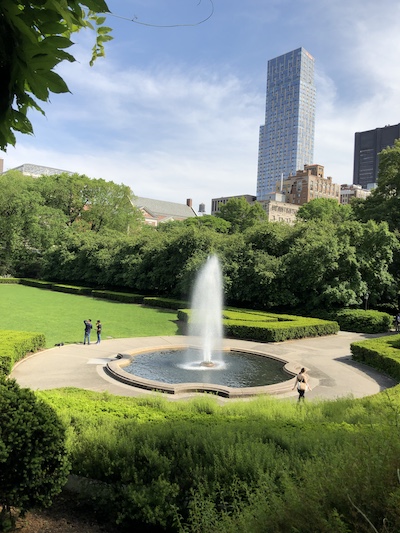 There's no conservatory here today. Early on, according to the Cultural Landscape Foundation, plants for Central Park were grown at a nursery on the site. Then, between 1898 and 1934, there was a large glass greenhouse with tropical plants – hence "conservatory garden." Today, all is open to the air.

Transformed into European-style gardens by landscape architect Gilmore D. Clarke, the Conservatory Garden opened to the public in 1939.

From Fifth Avenue you enter through an iron gate salvaged from the old Vanderbilt Mansion at Fifth Avenue and 57th Street. Walk around the grassy field and you can find shade, and maybe a bit of culture too, on a raised arcade that curves around the lawn. 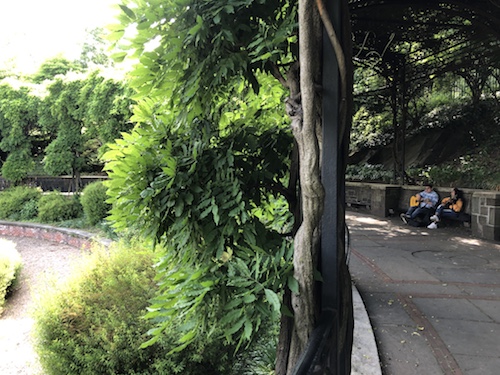 Underfoot you'll spot medallions engraved with the names of the original 13 states. 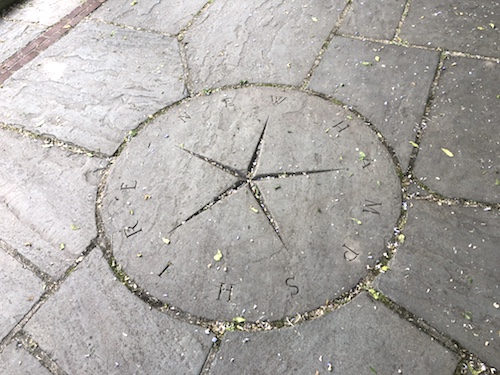 Olmsted didn't favor straight paths. But the ones here don't offend. They lead through dense green and flowery plantings in the English-style South Garden, and into some curves as well. Tulips or no tulips, the Conservatory Garden is a true balm for the soul in springtime. 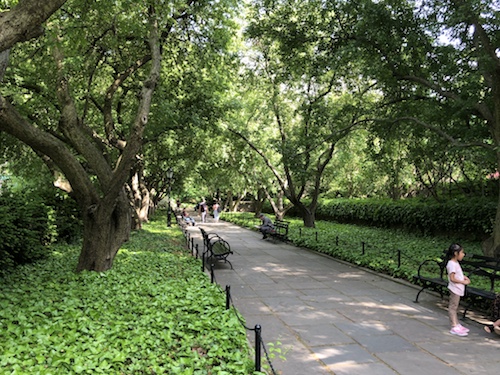 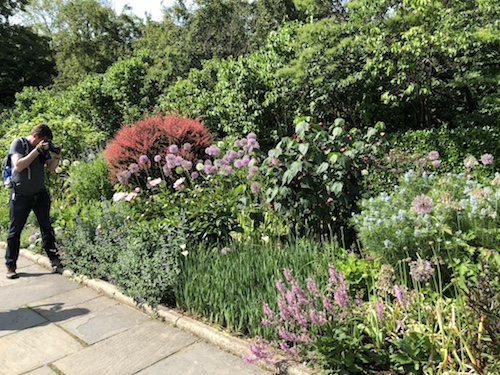 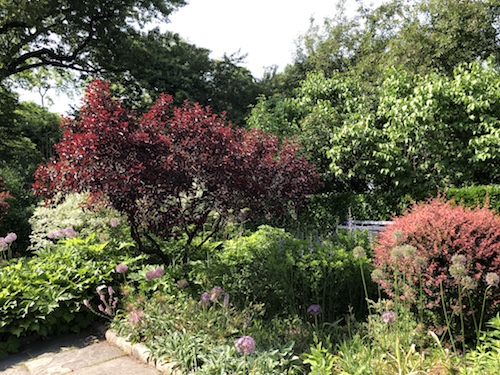 Trees with lots of character line the avenues, where you can find shaded seclusion on the brightest of sunny days. 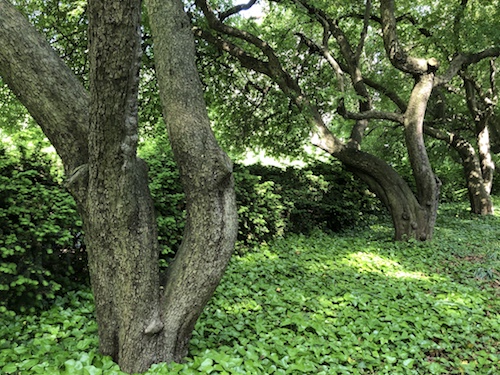 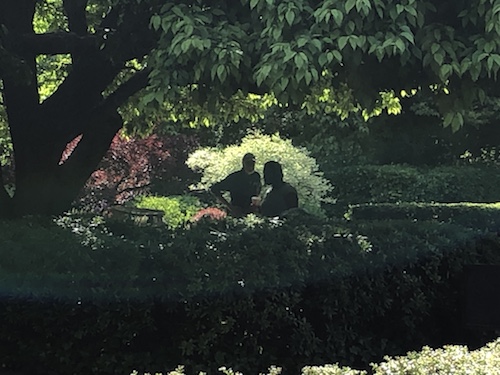 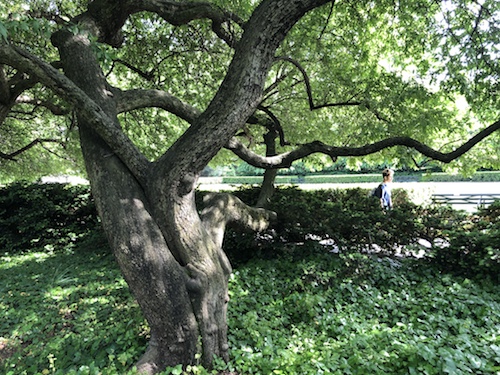 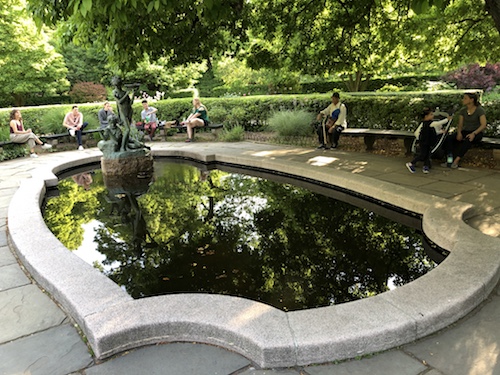 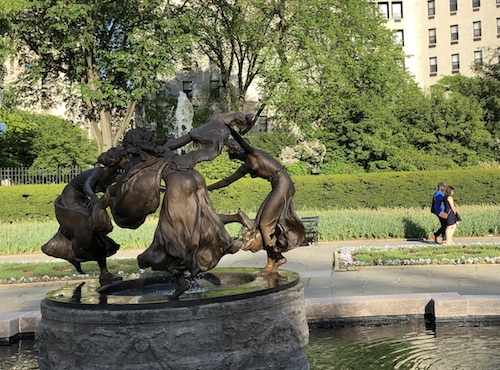 It came to Central Park in 1947 from the Yonkers estate of Samuel Untermyer, prominent lawyer, anti-Nazi, and expert amateur horticulturalist. His estate is now Untermyer Gardens, itself well worth a visit. In fact, let's digress with a side trip to Yonkers, just north of the city. 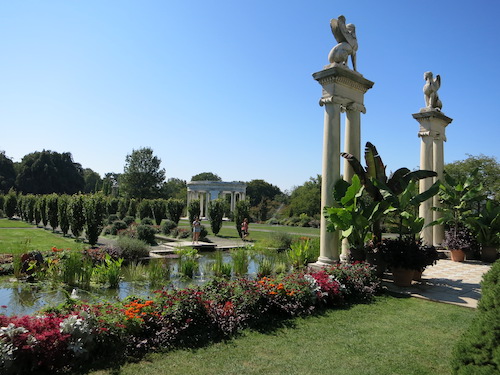 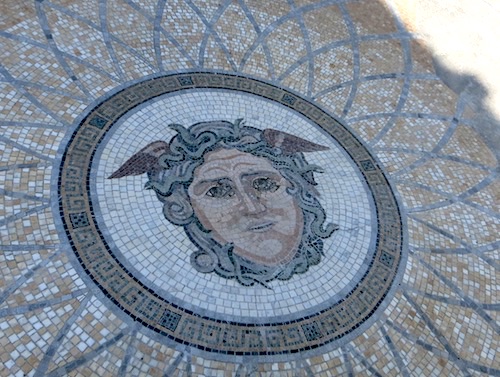 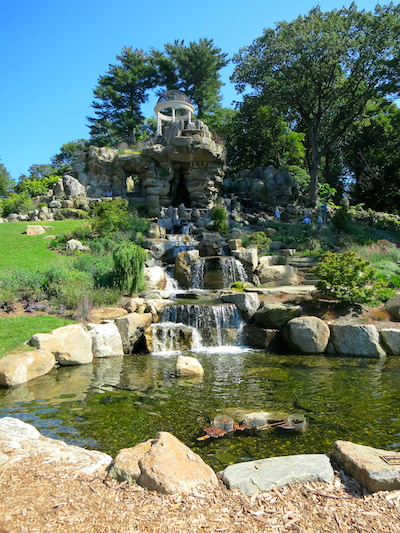 I suspect many frequenters of the more heavily trafficked southern regions of Central Park have never seen the Conservatory Garden. All New Yorkers should know about it and pay a visit. Its formal layout is unique within the park. It's lovingly maintained. It's not crowded (usually). And it's just plain beautiful. 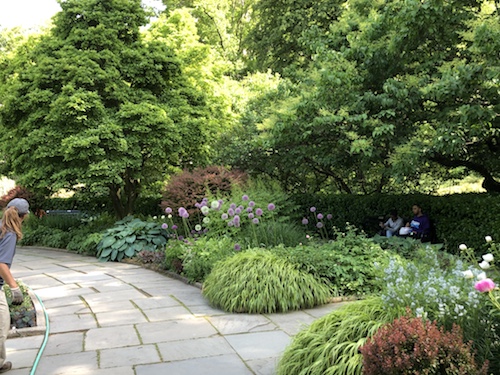