I first glimpsed Corlears Hook Park from the water. Specifically, from the NYC Ferry, whose new Lower East Side route stops at a new dock at Corlears Hook, just up the East River from the busy Wall Street terminal. What's that green space? I wondered.

Once again, I'd been mistaken about having visited every park in Manhattan.

Corlears Hook Park gets its name from the old Dutch van Corlear family (alternately spelled Corlaer or Curler). Prominent among them was New Amsterdam schoolmaster Jacob Van Corlaer, but his is an interesting family altogether.

Jacob's relative Anthony Van Corlaer was mythologized by Washington Irving as Anthony the Trumpeter. This bulbous-nosed musician is said to have ridden up Manhattan in 1642, Paul Revere-like, warning the Dutch settlements of a seemingly imminent English attack. The legend of his death by shark (or giant fish, or more likely drowning) is reputed to be the origin of the name Spuyten Duyvil.

Arent van Curler, the founder of Schenectady, was another relation. 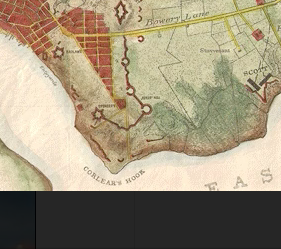 The "Hook" in "Corlears Hook" refers to a sharp bend in the shoreline you can see clearly in this image of the coast before landfill bloated it into its current more rounded shape.

When George Washington led the Continental Army from Brooklyn to Manhattan under cover of night in 1776, their boats put in where Corlears Hook Park is today. Presumably it was a known handy spot for that; the Parks Department website describes it as "[o]riginally marshland that was used by the Lenape tribe to land their canoes."

Today it's the NYC Ferry that pulls in, to a spanking new dock. 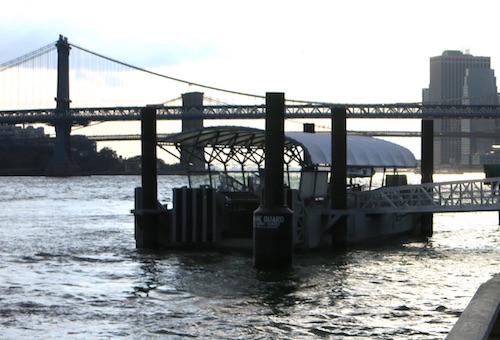 Meanwhile tugboats motor by, with or without barges, and jet-skiers zip past. (If Anthony the Trumpeter had had one of those, he might not have needed his trumpet; the noise alone would have alerted the colonists.) 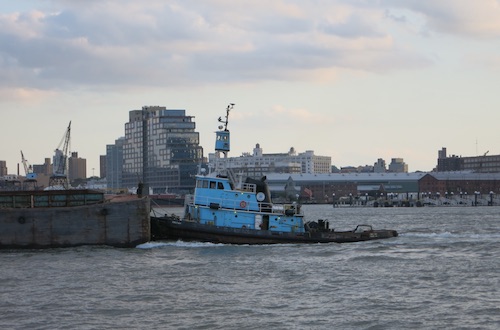 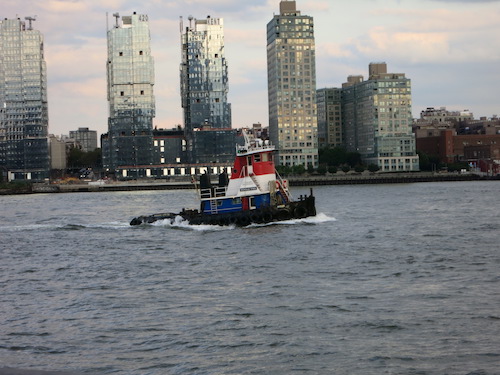 If you're not traveling by water, though, and you don't live in the neighborhood, getting to Corlears Hook Park takes some effort, as it's a bit of a walk from the East Broadway stop on the F. And when you do arrive, you may be disappointed at first. The old part of the park, west of the FDR Drive, is a bit bedraggled. 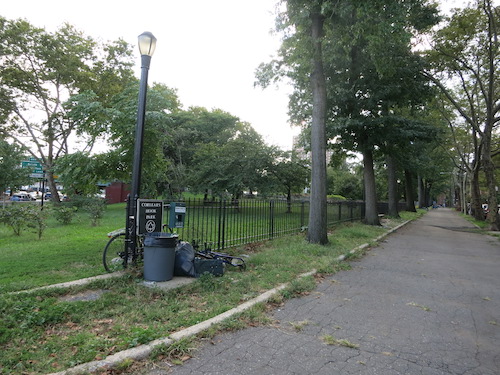 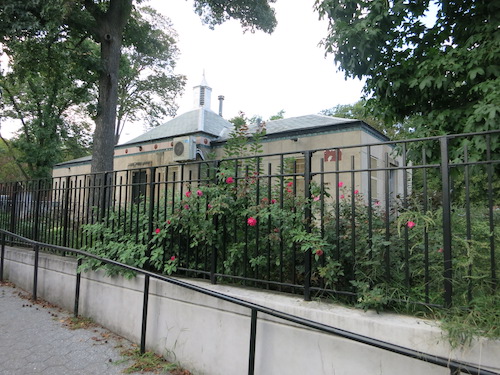 There's evidence of care, though, in the cut grass and pretty plantings. 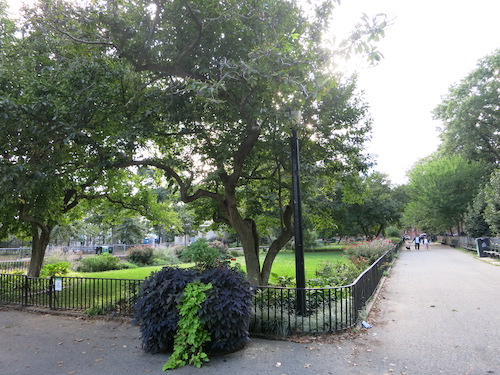 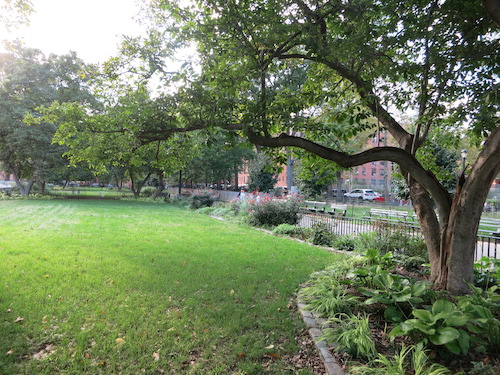 This part of the park dates to the turn of the 20th century. The city had acquired the land in 1893 to create open space to serve the neighborhood's ever-increasing immigrant population. When finished, it was purportedly quite a handsome park. When the FDR drive was built and the shoreline further developed through the WPA in the 1930s, the park lost some of its acreage, but Robert Moses added park space on the landfill across the highway, resulting in the two-part Corlears Hook Park you'll find today.

Cross a footbridge into the newer part of the park, give a nod to the stone eagles, and observe the bandshell before you. 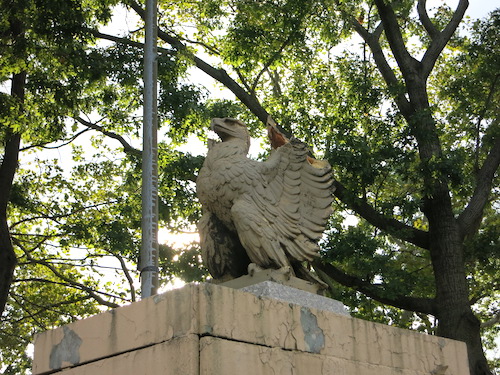 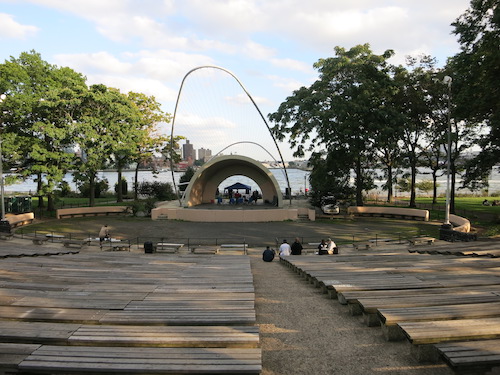 The day we visited, a small dance party was underway, an NYC Ferry zipped towards the dock, and of course, a quartet of Millennials was doing a video shoot. 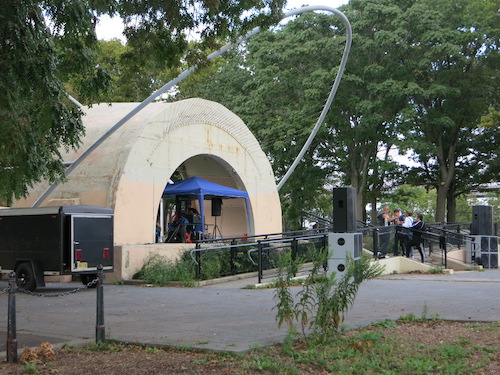 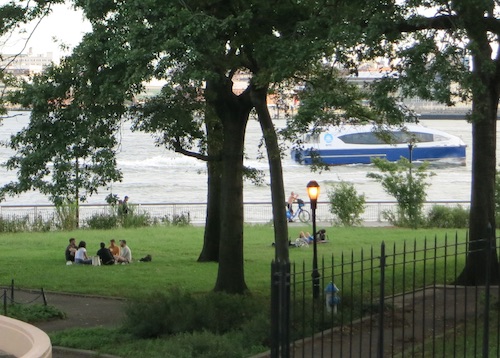 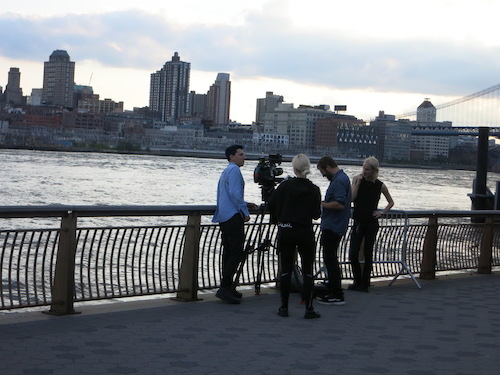 But this great "hidden" stretch of waterfront is a beautiful place to just relax too. 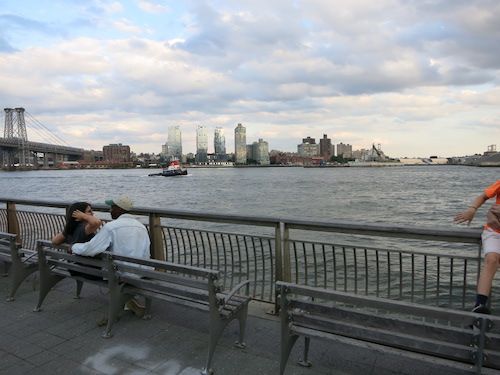 Corlears Hook Park is part of a string of parkland that runs along the riverfront. I spotted a skater rolling up out of Corlears straight into East River Park. (Maybe there's a time warp thing going on here, too; you don't see in-line skates much anymore.) 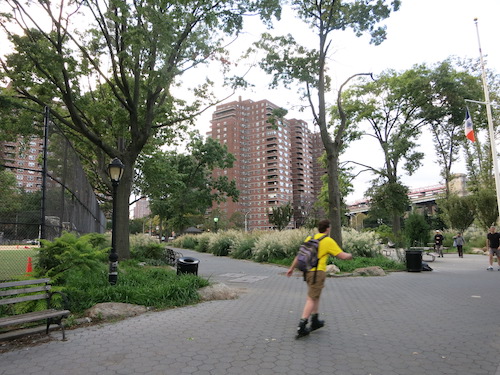 Somewhere around the transition point between the parks is the East River Park Fire Boat House, a picturesque landmark that now, courtesy of the Lower East Side Ecology Center, which works out of the building, has a "green roof," a bed of plant life atop the structure. (I take this on faith. You can't see the roof from the ground. It's a roof.) 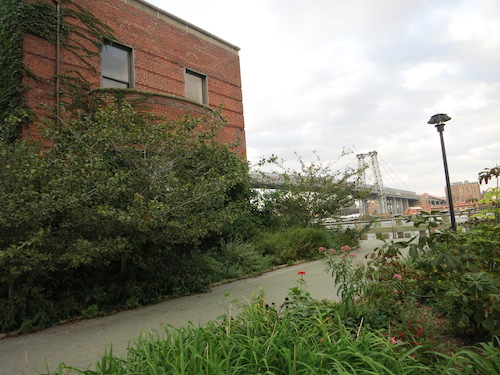 And for an actual fireboat, cross to the other side of the island, roll uptown, and visit the John J. Harvey at Hudson River Park.